Build A Real Estate Life That Prioritizes Your Family 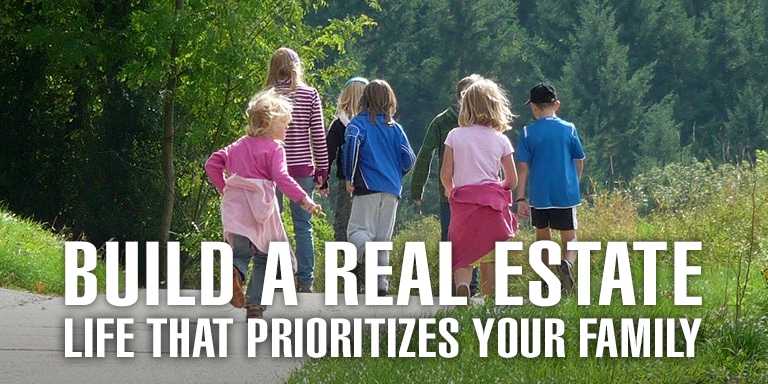 As real estate entrepreneurs, sometimes we love having our hands all over the business. Maybe we’re showing up at the site of a flip every day, doing the demo and buying the supplies, or maybe we’re connecting with investors, chasing leads, or doing a little marketing every day in the wholesaling business.

And it’s great, you know, to understand the ins and outs of your business. But there’s also a time when you might have to step back and ask yourself, “Is this still working for my family?”.

Jim Huntzicker had this shift in his thinking right around the time that he started his family. He realized that his business wasn’t serving his needs, and he was spending too much time away from his children. So he moved from rehabbing homes in his local market in Chicago to virtual wholesaling in Florida.

This move into another geographical region really helped him delegate out responsibilities so that he could focus more on family life. Not being able to run over to a property site meant that he had to get creative when he needed pictures of a new unit, but it also meant he could take a vacation worry-free because he’d built out his team to support his business.

FROM FLIPS TO REAL ESTATE INVESTING Jim started in the real estate business by rehabbing houses in Cook County. And no, not little houses, but 3,000 square foot houses and sometimes even massive Victorians. And he was doing 15 houses at a time. These were intensive jobs that sometimes required 7 days a week from him, but a sacrifice he could make because his wife understood his drive to build a business that worked for them.

I know that feeling that you get in the beginning of building a business. You’re just so excited and you’re willing to work like a dog to get the job done because you have a vision for what your life will look like with that success. And if you try to step back just a little, sometimes things start falling through the cracks because no one cares about your business like you do.

But then, you have a big, “Aha!” moment. Maybe you get sick or maybe you end up having twins like Jim did. But either way, you realize that your passion is costing you real time with the people that you love, and something in your life needs to change.

Starting to think like a CEO helped Jim shift from flipping houses to virtual wholesaling because he had to realign his business with his new focus on his twins. The CEO can take some time off because the team he’s built are really the ones running the business. The boss can have the dream and the vision for where everything needs to go, and the team are the people who make it happen. Building a team this way let Jim take a step back.

WHY A VIRTUAL WHOLESALING BUSINESS  OUT OF STATE WAS THE ANSWER

No change in direction is without hiccups. It’s a normal part of business to make some mistakes until you figure out what works best with your skillset. Jim tried wholesaling in Oregon and Washington, but the market was so hot and just so saturated with competition that he couldn’t get the right kind of team together.

So he tried the Florida market. This was a much better fit for him because him knew the Florida market. He went there often with his family and he was able to put together a great team to support his business. I say this all the time, but focusing on building your team should be your number one priority. A great team will hit grand slams out of more deals than a mediocre team. They’ll complement your weaknesses. They make you look good.

Jim ended up reverse engineering his business goals. He knew he wanted to be doing 50 deals a month. And he knew he didn’t want to get his leads from the same source as every other real estate investor.

He ended up investing some money and building a proprietary software that gave his team an edge over finding solid leads. You don’t have to build your own software to get leads, but Jim knew that in order to do those 50 deals a month, he had to have an edge over the other investors.

Keeping control over a virtual business is easy if you remember the two M’s. You can control the money and marketing. The money funds deals, and marketing controls the lead flow. The whole operation hinges on these two levers, so you don’t have to be right in the middle of the business. You can just keep an eye on those two elements and adjust them as needed.

GETTING YOUR PRIORITIES IN ORDER

I know that when I decided to take a step back in real estate life, I didn’t want to make less money. I just wanted my business to be less transactional. That’s when I shifted my focus to multi-family properties because they offered the cashflow that I was looking for.

If you’re thinking about shifting your focus because of a big life change, you could consider moving outside of your area, like Jim did, or maybe going into more joint venture deals, buying bigger units, or even just finding better partners to take more things off your plate.

One of the huge benefits about moving into multi-family properties for me is that I’m just not doing that many deals. If you’re really, really good, you might end up with one deal a month, but that’s still not a full-time job. As I’ve moved into bigger multi-family properties, I’ve been able to step back and focus on the things I’m passionate about, like coaching volleyball and my family.

Every few years, it’s pretty normal to want to change things up in your life. My mom always said that she felt like she was married to a different man every five years because someone would leave the house, or they started a new business, or someone would die. After my health crisis, I’ve really worked hard at prioritizing my physical health.

This real estate investing life is one that you can design to work for you. If it’s not working, change it. Pivot. Move in a new direction. Your business supports your family, your health, and your happiness, and it shouldn’t be the other way around.

WHAT ARE YOU THINKING?

Every business—no matter how small or how large—can benefit from professionally-created videos and digital marketing tools. Have you had success with videos? Or are you looking to learn more about the process? Let us know below.